Three Elephant Chess Â© May 2006 by Gary K. Gifford "The White Army's last elephant runs past three men with spears. A dark War Tower plunges downward, taking with it the three warriors. The elephant moves behind a large stone... it appears to be safe... but, a dragon horse looms nearby and another War Tower approaches..." The object of Three Elephant Chess is to capture all three of your opponentâ€™s Elephants before he (or she) captures all yours. There are no checks or checkmates. This game has no single source of inspiration that I can point to, with possible exception of the Spearman and the War Tower. The Spearman was likely inspired by related piece movement found in Ploy, a chess variant produced by 3M Games (now extinct). Also, the Alfaerie "Spearman" graphic (which I used) directly influenced my naming of that vector-changing piece and I was happy to see that the Spearman graphic provided images for the three needed vectors. The War Tower is closely related to my Ram piece in Catapults of Troy. The Ram would take out an entire rank or file then â€œsplinterâ€ (self destruct). 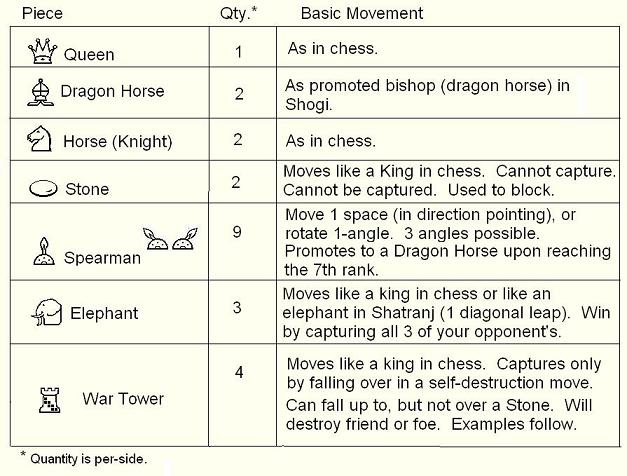 The game and piece movement is fairly simple. Movement: On your turn you can do all of the following. As a minimum movement you must complete action 1 or action 3. The movements must be completed in this order: 1. Move a Spearman one space in the direction of its spear. Spearmen can only move one space forward or diagonal, depending on their spear direction. 2. Rotate a Spearman one angle. This can be the same Spearman from Action 1, if applicableâ€”or a different Spearman. Thus, a Spearman pointing vertically towards your opponent could rotate to â€œdiagonal-left,â€ or to â€œdiagonal-right.â€ A Spearman aligned with a diagonal can only rotate to the â€œstraightâ€ vertical position. 3. Move one non-Spearman piece. Note that Spearmen capture by displacement of the captured piece. The War Tower -- It can wipe out 3 squares orthoganally or diagonally (see Notes section). A few examples of capture now follow. In Diagram 1 it is white to move. If it were Blackâ€™s move Black could not capture the War Tower with his e7 Pawn as it points uselessly to the stone on f6. Black could, however, self-destruct his own Tower on e8 thereby destroying e7, e6, and e5. But, it is Whiteâ€™s move. He could play â€“ War Tower destroys f7, g8, h9 as shown in Diagram 2. Instead of that plan (in the preceding diagram) White could destroy e7, e8, e9 as in Diagram 3. A War Tower cannot fall through or push through a Stone, but will capture pieces (friend or foe) that reside between it and the Stone as indicated above. Here (in Diagram 5, which follows) the War Tower could only capture the g6 Elephant at the cost of itself and the White Elephant on I6. And this includes the introduction and rules to Three Elephant Chess. Additional information may be added, should clarification be needed on any points of the game.

A War Tower will wipe out 3 spaces orthogonally or diagonally from its resting space, then self-destruct. A War Tower cannot make its destructive play on the same turn it moves. A War Tower may not always get to destroy three squares, for example... when a Stone interferes or when it is close to the edge of the board. In case there is some doubt, please be aware that Elephants and Knights can jump over the Stones. ---------- Alfaerie Variant Chess Graphics were used in the setup and example illustrations. A special thanks to Jeremy Good and Antoine FourriÃ¨re for their pre-set work. Jeremy made the pre-set; Antoine solved an important Spearman directional problem. Many thanks to both. Here is a link to the preliminary pre-set... it can be used to play a game until the final pre-set is made (which will be a little less cumbersom). You can cut and paste the link. /play/pbm/play.php?game%3DThree+Elephant+Chess%26settings%3DThree+Elephant+Chess