Paco Shako (Esperanto for 'Peace Chess') is designed by Felix Albers to move chess out of the context of war and death, bringing it into the realm of peace and love instead. So the concept of replacement capture, where the captured piece 'dies' and is removed from play, is replaced by a move that makes the newly arriving and the original occupant both stay on the square, embracing each other. The game is won by being the first to embrace the opponent's King. 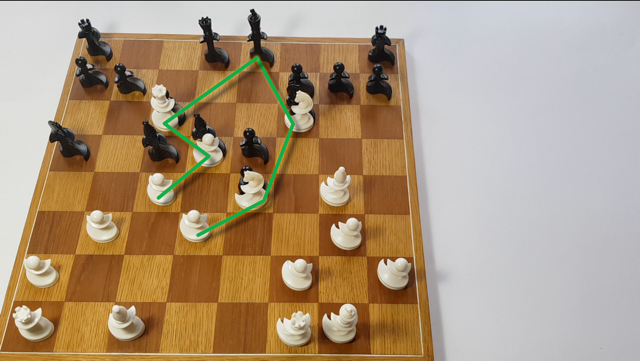 The initial setup is the same as that of orthodox Chess.

All pieces move as in orthodox Chess, with the understanding that the orthodox capture moves are now used for embracing another piece, and orthodox non-capture moves can only be used to move to empty squares.

There is no capture in Paco Shako, but moves that can capture in orthodox Chess can now be used to move a piece to an occupied square. If that square contained a piece of opposite color, this and the moved piece will coexist there, 'embracing' each other.

If the target square already contained a pair of embracing pieces, this releases the previously hugging piece of the same color from the embrace, and this piece must then move away from that square in the same turn. If there is no place for a piece released from an embrace to move to, according to its normal way of moving, you cannot move into the square where it is hugging.

Like in orthodox Chess, it is never allowed to move to a square that is occupied by a lone piece of your own color.

Pieces released from an embrace can also hug a lone opponent piece, or release yet another piece from an embrace, just as any lone piece could do. So you can get an entire chain of releases, all in the same turn.

When a piece embraces the opponent's King, the game is over and the player that moved it wins. Kings are not allowed to embrace other pieces on their own initiative.

Embracing pieces can be moved together as a 'union' by both players, according to the rules for moving the piece in the pair of the player whose turn it is. Such a hugging pair can only be moved to an empty square, through moves that in orthodox Chess would be non-captures.

En-passant capture can be used to embrace the doubly-pushed Pawn, which for this purpose must be moved back to the square that it skipped (possibly together with the piece it was hugging).

Pawns have a double push whenever they are on their first or second rank, and can be captured en passant in reply. This applies even when they have moved, but are transported back as part of a union moved by the opponent.

When a pawn reaches the final rank, it must promote to Knight, Bishop, Rook or Queen. This also applies to pawns that get to last rank in the opponent's turn, when an pair of hugging pieces is moved. In this case the owning player must promote them at the start of his own turn, in addition to (so not 'instead of') making hi own move.

The rules of Paco Shako have been evolving; in older versions of the rules the King could safely embrace other pieces on his own initiative, and it was not allowed to move unions. It is under consideration whether these rules should still be applied to unions containing a King, which otherwise is completely defenseless. There also has been a rule variation where a freshly formed union could optionally be removed from the board at the discretion of the player forming it.

An interactive / intelligent diagram to illustrate this embrace and release mechanism is available below. You can play against it.

A wondeful set of Chess pieces was designed by Felix Albers. These are shaped such that two of them can be placed on the same square, embracing each other. And the bottom of two hugging pieces will look like the Yin-Yang symbol! These pieces are now sold commercially. 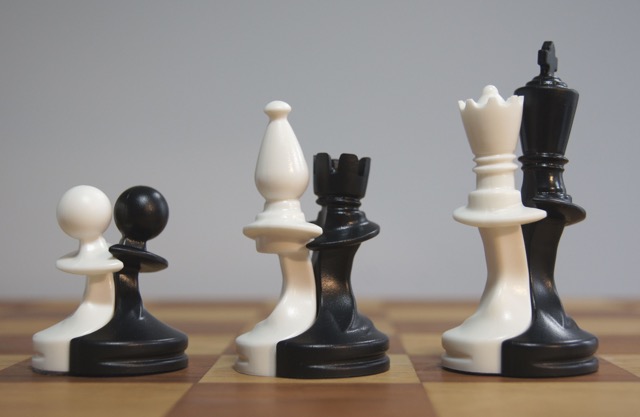