This page is written by the game's inventor, Frank MacCrory. This game is a favorite of its inventor.

HORSEMAN’S CHESS is a chess variant in which a piece’s movement capabilities can change during play. The primary actors are the familiar chess pieces (Pawn, Rook, Knight, Bishop, Queen, and King) with their traditional movement capabilities except that none of them can move more than two spaces nor jump spaces without assistance.

For most pieces, the change in movement with or without a mount is straightforward. The effects upon the Pawn and the Knight may not be obvious. The full movement rules for each piece (dismounted, riding a Jumper, and riding a Charger) are detailed in the Pieces section. Note that the symbols for the Rook and Knight are nonstandard to make sense with the mounts. 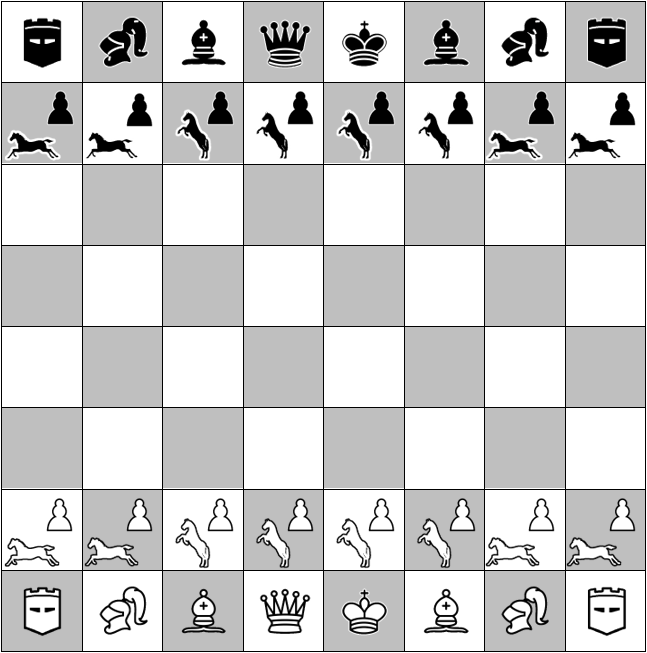 Each player arranges their pieces as in orthodox chess, except that each Pawn is set upon a mount. From left to right, the first two Pawns are mounted on Chargers, the middle four on Jumpers, and the last two on Chargers.

White moves first, and pieces move according to the rules detailed above in the Pieces section.

If you capture a piece while it is riding a mount, remove both the piece and the mount from the board. You may capture an enemy unoccupied mount as if it was a piece.

As an alternative to normal movement, you may elect to dismount a piece. Dismount by moving that piece according to its dismounted capability and leaving the mount in the starting space.

If any piece ends its movement on an unoccupied friendly mount, the piece mounts the Jumper or Charger and gains the appropriate movement abilities next turn.

In “Equestrian” the Pawns start dismounted and all eight pieces in the back row start on Jumpers.

HORSEMAN’S CHESS can also be played with any combination of starting mounts to which the players mutually agree.  In such a game, the starting arrangement should be noted before the algebraic notation recording the turns (see Notes section below).