This page is written by the game's inventor, Aurelian Florea.

This game is part of the apothecary series, a series of games created by myself with the purpose of finding new ideas in chess and habituating people with progressivelly larger boards. Unlike earlier versions this game it does not wish to be a replacement of regular chess for advanced players.

The board is 12x12 with 8 brouhaha squares. The ranks are numbered (0),1,2,3,...,11,12,(13) with the parentheses standing for brouhaha squares only. There are in total 576 initial possible setups. For the purpose of explaining the initial setup pieces are split into 7 categories:

That means that in total there are 576 possible initial positions. One sample is shown below. 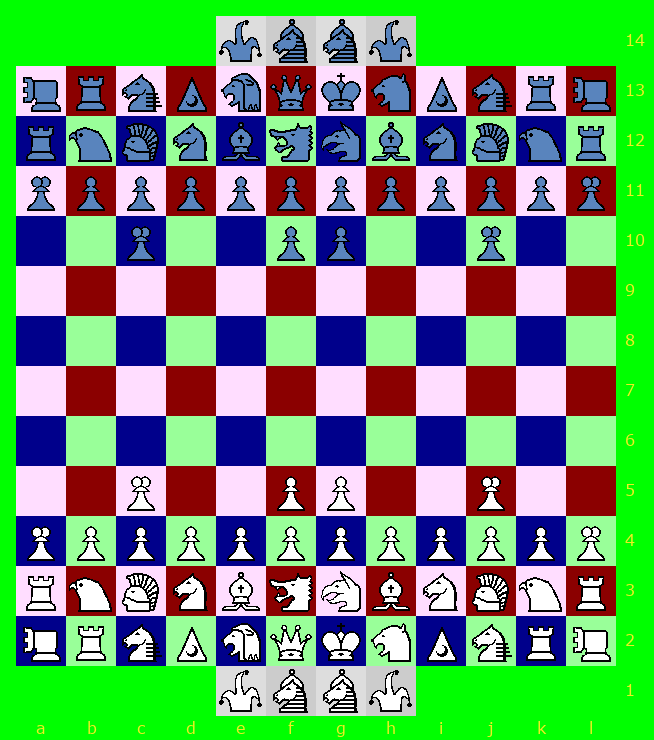 The King moves like an orthodox chess King and it is the royal piece of this game.

The Pawn moves like an orthodox pawn. It can promote at the furthest 3 ranks for each player. On the rank closest to the player it promotes to either bishop, knight, cannon, wizard or champion. On the next rank the pawn can also promote to rook, joker, knightrider, vulture or sangoma.  At the furthest rank the pawn may also promote to queen, dragon, griffin, tiger or lion. But also, in order to promote, the player must have the required piece in reserve. In reserve enter all lost pieces by the player allong with (from the beginning of the game) 1 queen, 1 rook, 1 knightrider, 2 bishops, 1 knight and 1 champion.

The Berolina Pawn is a reverted pawn that moves to the 2 forward fields and caputures ahead. Promotion rules are the same as with the regular pawn.

The Queen  is an orthodox chess queen.

The Dragon is a bent rider. It starts the move like a ferz and may stop here or continues toward outside like a rook.

The griffin is a bent rider. It starts the move like a wazir and may stop here or continues toward outside like a bishop.

The Lyon is a bent rider. It starts with a diagonal move of exact 2 spaces (it can stop here  or in the intermediate square) and then continues towards outside like a rook. It may also move like a dabbabah.

The Tiger is a bent rider. It starts with and orthogonal move of exact 3 spaces (it may stop here or in the intermediate squares) and then continues towards outside like a bishop. It may also move like an alfil

The rook is an orthodox chess rook.

The knightrider is a knight that may continue by repeating the first move.

The joker does not  have a move of it's own. Instead it copies the last move of the opponent.

The sangoma is a bishop+zebra(3 2 leaper) compound.

The cannon is the cannon from Xiangqi. It moves like a rook but captures by hoping over a piece called platform.

The bishop is a regular chess bishop.

The Vulture is a path mover akin to the falcon piece in falcon chess, but it's destinations are the 41&43 squares away from the piece. It may also jump withouth capturing 2 squarez orthogonally.

The knight moves and captures like a regular knight but it can also move (but not capture) with a trebuchet (3,0) or a alfil(2,2) leap.

The wizard steps 1 step diagonally  or leaps like a camel (3,1).


Point count occurs in two situations:
1. The 150 moves rule takes charge (akin to the 50th moves rule of orthodox chess but after 150 moves) i.e. 150 moves have taken place and no captures or pawn pushes happened.
2. An position has been repeated three times.

With the purpose of explaining the points count pieces are split into 5 categories:

1.Heavy Pieces: Queen, Dragon, Griffin, Lion and Tiger - they worth 9 points in the points count.

2.Average Pieces: Vulture, Rook, Knightrider and Sangoma- they worth 6 points in the points count

3.The joker - worth 5 points if the opponent has exactly more heavy pieces than non-heavy pieces, 4 points otherwise

4. Light pieces: Bishop, Knight, Cannon, Wizard and Champion - they worth 3 points in the points count

5.  Pawns: Regular Pawns and berolina pawns- they worth 1 point in the points count

IIn this game there are 4 different castling moves for each side of the king.

1. Long Rook Castling- King slides 3 squares on the bottom rank and the rook jumps imideatly on the other side of the king

2. Short Rook Castling- King slides 2 squares on the bottom rank and the rook jumps imideatly on the other side of the king

3. Long Cannon Castling- King slides 4 squares on the bottom rank and the cannon jumps imideatly on the other side of the king

4. Short Cannon Castling- King Slides 3 sqaures on the bottom rank and the cannon jumps imideatly on the other side of the king

The en passant rule is as usual only that pawns may move an arbirary number of squares until the middle of the board. The 50 moves rule becomes a 150 moves rule. The brouhaha sqares disapear after they have been vacated. Captures may happen on the brouhaha squares and that preserves them.

At the beginning of the game the joker does not inherit any move because there have not been any moves. That means white cannot move it's joker at the first move. Black may imitate the move made in the same turn on it's first move.

A joker imitating a pawn has only the regular moves, no double step, no enpassant and no promotion even if that pawn has promoted the last move.