This name was originally given to a complex microregional 2d variant with some rather unchesslike features, but an idea came to me that fitted the name just as well but was more like Chess, the Quantum King being its only real oddity. Finally I decided to switch to that newer idea for a variant, and here it is.

It turns on the breakdown of two identical Xiang Qi sets and one different one. I imagined that third one to be larger, for reasons that will soon become apparent. You get one of one kind of piece, two each of six kinds, four each of five, five of one, and ten of one. This allows the motif of four each and three simple pieces and two each of their pairwise compounds to be deployed twice over. The threesomes meant a 3d variant - Rook-Bishop-Unicorn and Knight-Sexton-Ninja. The two awkward bits are that there are only ten pieces left over to serve as Pawnlike pieces. That is where the gateway element comes in, so that ten pieces can form a proper barrier. 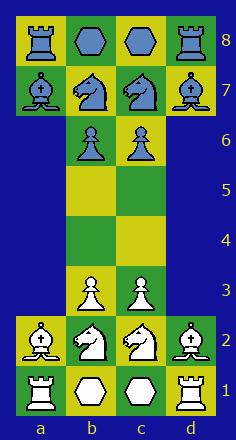 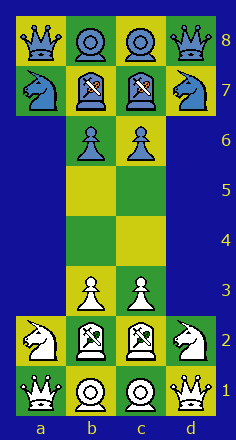 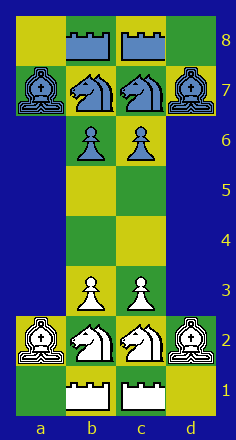 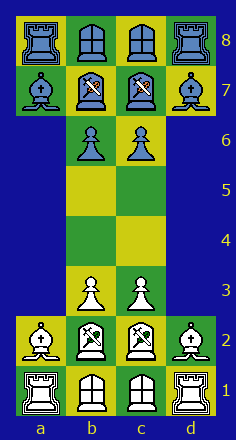 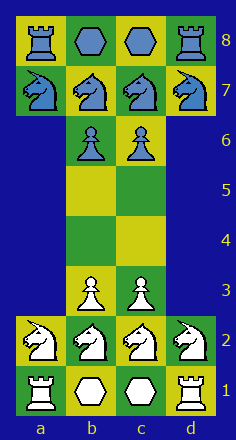 Rules largely follow on from FIDE Chess, extended to 3d with the extra pieces, but there are the following further differences:

The one-foot-in-the-grave rule applies. This means that each oblique move, and each step on any kind of diagonal, must be in a complete convex block of cells measuring 2x2 for the Bishop and the capturing Pawn, 2x2x2 for the Unicorn, 3x2 for the Knight, 3x2x2 for the Sexton, and 3x3x2 for the Ninja. The same dimensions apply to compound pieces (including Emperors) moving as the relevant component.

It should perhaps also be stressed that no piece may move to, or through the centre of, a cell in the row occupied by a Quantum King, but that a Knight can pass between two such cells.

There is no double-step initial move, En Passant, or Castling.

Transformation takes the place of a normal move. The only circumstances when it can happen are those where it must: when a player has no valid move retaining the Quantum King, or when an enemy piece threatens one or more of the cells that it occupies, or both. It happens in place of a normal move, and the Emperor cannot leave the row altogether until an enemy piece has moved. If a player manages to threaten all four cells occupied by the enemy Quantum King at once, it is Checkmate.

Once a player has an Emperor Check, Checkmate, and Stalemate are as usual.