Command and Maneuver: A Tale of Two Countries

For some time now, I've been working at designing a legitimate chess-wargame fusion, a true military chess. This game is the introductory scenario to Command and Maneuver, a structured multi-move abstract strategy wargame construction kit featuring diceless combat.

A Tale of Two Countries was developed by Dave Bennett and myself, and played by 3 gamers. None of the 4 is a serious chessplayer, much less a variant player. All have agreed this is both a true wargame and legitimate chess game. A good part of the thanks goes to this website and the people who played the earlier games in this series, which started with Chieftain Chess, and those who discussed them, the ideas behind them, and chess theory relating to those ideas. Thank you. I offer to anyone and everyone who wants them printable files in Word and other MSOffice software, or PDFs of the files, for a Print and Play high-quality version of this game. Just ask.

There are 2 special mentions for rules changes. The skirmisher self-activation rule was suggested by Rich Hutnik. The elimination of movement penalties for friendly cities was suggested by Jeff Cierniak. 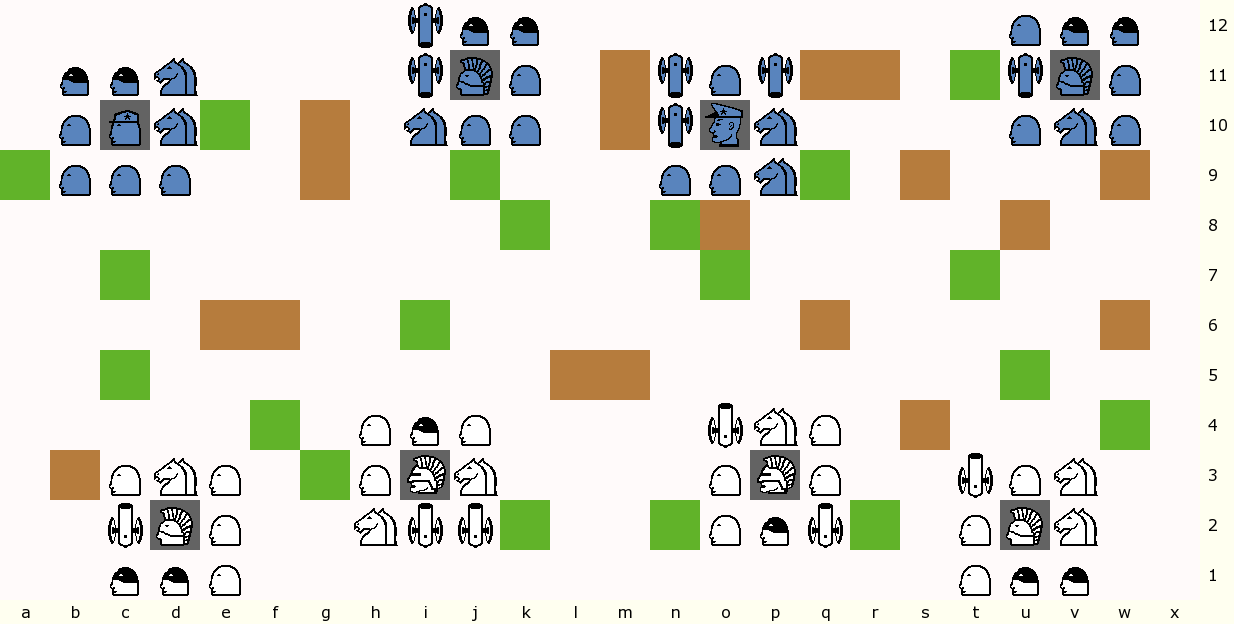 NOTE: For the initial preset, all "At Start" pieces have already been placed. Players do place all pieces entering on Turns 13, 25, and 37, if the game lasts that long. No playtest game has gone beyond 35 turns.

Each player deploys
1 Inf, 1 Skr, 1 Can, & 1 Cav, in empty home cities;
2 Leaders**, totalling 8, in the empty square directly behind any 2 friendly cities.
These pieces' entries may be delayed 1 or more turns until a deployment square becomes empty, or for any or no reason.
**Choose among these values: (5,3) or (4,4).

It slides 1 or 2 squares. It may not jump. It may change direction during its move, but may not move back to the square it started from. The leader captures any piece it lands on, stopping its move on that square. It has the special power of activating pieces so they may move. This is the piece that actually controls your army, by giving orders to move to all the other pieces. See Activation. This piece may move to (up to) 24 squares.

Infantry steps 1 square in any direction, to any of the 8 adjacent squares.

This piece leaps 2 squares from its starting point, and lands on any square the knight in chess may land on, moving 1 square orthogonally and one more square diagonally outward. It may jump over other pieces. This piece may move to (up to) 8 squares.

This piece moves up to 3 squares, orthogonally only; that is, in a straight line and only through the sides of the squares. It may freely jump any pieces in its way, having no effect on the pieces jumped. This piece may move to (up to) 12 squares.

This is the diagonal version of Cavalry. It moves up to 3 squares, diagonally only, and in a straight line. It may freely jump any 2 pieces, friendly or enemy, to land on the 3rd square. This piece may move to (up to) 12 squares.

Have one of your units in an enemy home city at the beginning of your turn, or reduce your opponent's total leader activation value below 8.

All pieces capture by replacement. A unit may only capture 1 piece per turn, and must legally end its move on the square of the captured piece.

Each player gets 8 action points to apportion as desired, except on Turn 1. On Turn 1, the first player only gets 4 action points. The second player gets 8.
A player may never move more pieces than that player has Leader activations, including self-activations.
No piece may move more than once in a turn.
No piece is required to move. A player may pass a turn. If the opponent then also passes, the game is a draw.
Pieces are moved one at a time, in any order desired by the owning player.
All moves must be legal when they are made.

Pieces [except Leaders] may not move under their own power. They must be activated by a Leader to move. (Exception: see Skirmisher self activation below.)
No piece may ever move unless it is activated by a Leader which has to be within 2 squares of it at the start of its move. (Exception: see Skirmisher self activation below.)
An activated piece may move outside the 2-square activation range of the Leader which activated it, or any friendly Leader's activation range.
A Leader may activate up to as many pieces per turn as it has activation points, including itself or another Leader.
Leaders may activate pieces both before and after they move.
No piece may be activated or move more than once per turn.
Once a piece has finished its move, it becomes inactive again. It cannot move in a subsequent turn without being re-activated by a Leader.
Leaders may activate only pieces of their own color.

Whenever a cannon and a leader are orthogonally next to each other, they may exchange squares as 1 action during the turn. Neither piece may move farther that turn. The leader may activate pieces before and after the exchange of positions, counting the 2 squares from the leader's position at the time of each activation.

â€¢ There are 3 types of terrain: towns/cities are gray, hills/mountains are brown, and trees/forests are green.
â€¢ Foot units, the infantry and skirmisher pieces, ignore terrain for movement and capture.
â€¢ All other units, Leaders, Cannon, and Cavalry, when moving into terrain may only move 1 square in those turns.
â€¢ Cavalry and cannons cannot leap over a terrain square to land behind it.
â€¢ Cannon may not move into trees, so may never capture a unit in trees.
â€¢ Cavalry may not move onto hills, so may never capture a unit on a hill.
â€¢ Cannon must stop next to a town or hill before moving into those terrain squares.
â€¢ Cavalry must stop next to a town or trees before moving into those terrain squares.
â€¢ Leaders, cannon and cavalry may only move into terrain from an immediately adjacent square that they started the turn in. It takes their entire movement to enter a terrain square. Exception: see friendly cities, below.
â€¢ Leaders, cannon and cavalry may leave terrain squares with normal movement (unless moving into another terrain square.)
* Friendly cities are those that start the game in your possession, and this never changes during the game, regardless of what cities you control during the game. All friendly units may treat friendly cities as empty (non-terrain-containing) squares for movement purposes.

â€¢ Each player has casualty piles for the opponentâ€™s pieces, one for each type of piece.
â€¢ When a piece is captured, it is put into its casualty pile.
â€¢ When there are enough of the same kinds of piece in the casualty pile as given in the scenario rules, one piece may be returned to the game as a replacement. The rest are put in the killed pile and removed from play. See each scenario for specifics.

Each player gets 1 unit back for every 4 casualties of that unit type. The first three casualties are placed in the killed box, and the 4th is returned to the owning player, to come on board 2 (or more) turns after it becomes available, in any empty home city.
NOTE: Currently this must be tracked in the game comments. Please assist each other in doing so.

Special rules may be given for specific scenarios.