This page is written by the game's inventor, paculino.

Amazonian chess is identical to FIDE chess, except that it is played on a 10x10 board and has the Amazonian piece like from the Game of Amazons. The Amazonian can make any move that a queen can, but cannot capture other pieces (but can be captured). After each move of an Amazonian, it shoots out a flaming arrow, which moves from the Amazonian like a queen, but it cannot be captured or moved after the initial placement. Sliding pieces cannot go past it, but jumpers can jump over it. 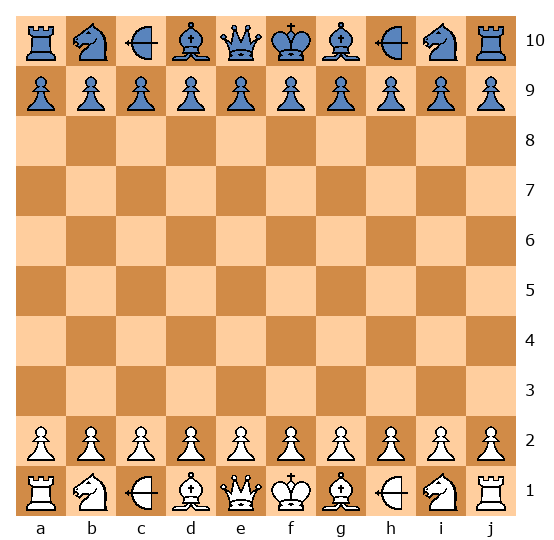 All pieces function as they normally do in FIDE chess if they exist in FIDE chess, but on a 10x10 board. Amazonians/Archers can move just like a queen, but cannot capture other pieces (but it can be captured, just not by the King). When they reach their destination, they shoot an Arrow horizontally, vertically, or diagonally, as a slider piece. The Arrow cannot be captured or moved, and functions as if that space vanished. When this is used to prevent one player from making any legal move, then the other player wins. When this divides the board into sections that cannot be travelled between and the game would otherwise be a draw, then the player occupying the larger travellable section wins.