This page is written by the game's inventor, Joel .

My idea here is to create rules in such a way that there is dynamism almost everytime the game is played. 'Captive Kings' as the name suggests means that the idea is to rescue the King alive and not to kill him.Â

The board set up is exactly like in the standard Chess but with one exception. The White King is placed on e8 and the Black King on e1.Â 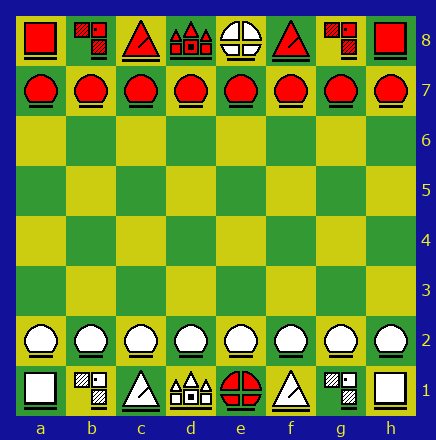 The pieces and their movement are the same as in standard Chess.

Apart from differences in the setup, already described above, Captive Kings Chess is played like Chess with these further differences:

1. The object is to move your King to your side of the board. This is accomplished by moving White's King to the fourth rank or Black's King to the fifth.

3. Capture is not allowed on a player's first move.

4. The King is not allowed to capture any pieces on the opponent's first rank, this being where each King starts, but it may capture unprotected pieces on other ranks, including Pawns on the second.