To avoid offence I state explicitly that this is a tribute, homage, and any other synonym for these that you can think of, to Fergus Duniho's Fusion Chess. For the record so are my Herichess and Fusion Xiang Qi.

The idea for this page arose from considering non-straight linepieces for my piece article Man and Beast 09: Mighty like a Rose. I was thinking of names for their compounds with Straight linepieces. A few such names had already been invented, in Tripunch Chess, snd further ones are now fully documented in Man and Beast 13: Straight and Crooked Moving. I considered the idea of generating the Ecumenical Chess range of pieces through Fusion, for example using the same array as my Bachelor Kamil, and it occurred to me that Straight+Nonstraight compounds could also appear by this means. I initially devised four variants on this theme: one with Straight and Crooked pieces, one with these plus the oblique leapers the Knight and Camel, one with Straight and Bent pieces, and one with Tim Stiles' Double Bent pieces.

I have now added one with divergent linepieces, which have the same destinations as the Queen but with some directions accesible only without, and the rest only by, capturing. For this reason I give them the feminised forms of the names of the corresponding short-range pieces, which have the King's destinations with the same restrictions. In this last variant, each combination of standard piece and divergent piece share either a noncapturing or a capturing move, so that their Fusion creates a piece that is less than the sum of its parts but still more than either component alone. It was inspired by another, non-fusion, variant using full FIDE armies plus these pieces and extra Pawns on a still larger board, but I have forgotten the name and have been unable to rediscover it.

To keep things simple, Fusion is Rex Exclusive in all variants. 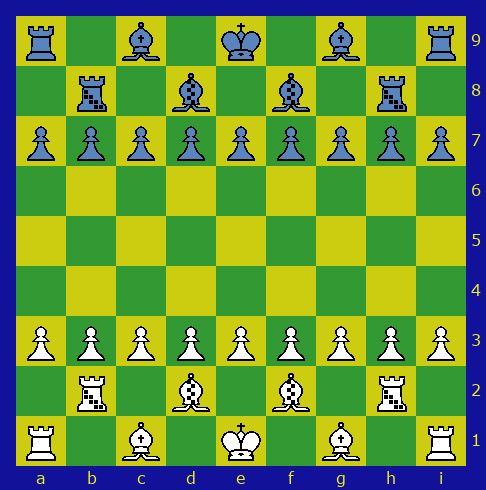 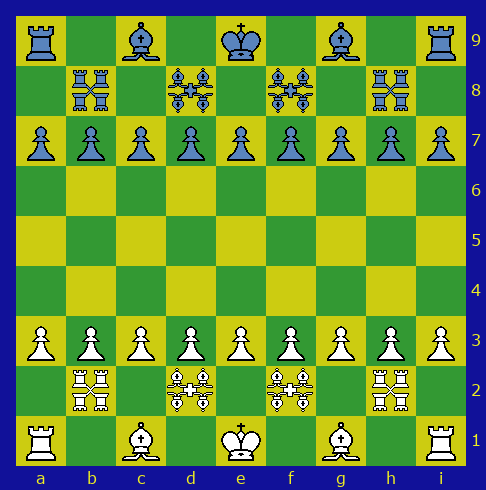 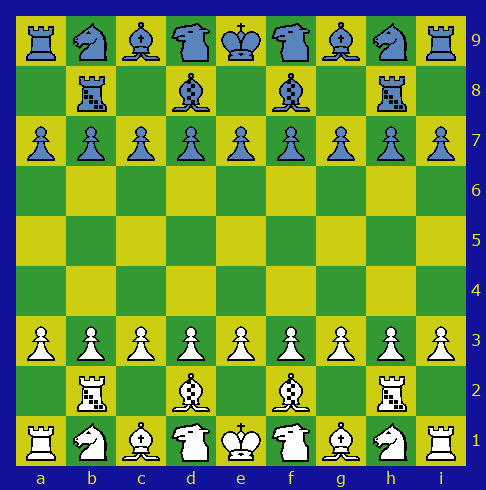 Other options are a Double-Bent variant substituting a Wolf for the Girlscout or Gryphon and a Fox for the Boyscout or Anchorite, and a Divergent variant substituting a Stewardess for the Girlscout or Gryphon and a Contrastewardess for the Boyscout or Anchorite. It matters not that a player's linepieces all start on the same colour squares, and leapers in the Kamil version on the other colour, as Fusion means that any colourbound (Bishop/Boyscout/Camel) or indeed colourswitching (Anchorite/Knight) properties can be got round through Fusion.

ARRAY PIECES include four or five kinds of FIDE piece, plus the following extras: In the Double-Bent variant:
The WOLF makes a Ferz move followed by a Rook move and finally another Ferz move, or just two Ferz moves at right angles.
The FOX makes a Wazir move followed by a Bishop move and finally another Wazir move, or just two Wazir moves at right angles. Like the Bishop this piece is colourbound.

In all variants:
Rook+Bishop=QUEEN, the familiar sixth FIDE piece. In the Divergent variant, Stewardess+Contrastewardess also forms this piece.

In the Crooked-piece variants the names, of my own coinage, have a child-prodigy flavour:
Rook+Girlscout=GIRLROOK, one of four half-Crooked Queens.
Rook+Boyscout=BOYROOK, ditto. Even destinations can be reached by up to three routes.
Bishop+Girlscout=GIRLBISHOP, ditto. Colourswitching moves must be a zigzag, but diagonal ones can be direct.
Bishop+Boyscout=BOYBISHOP, ditto. This is Queenlike but colourbound.
Girlscout+Boyscout=DOUBLESCOUT, the fully-Crooked Queen.

The Kamil variant has additional compounds with the oblique leapers:
Rook+Knight=MARSHAL, a long-standing name.
Rook+Camel=CANVASSER, coined by myself for Ecumenical Chess.
Bishop+Knight=CARDINAL, a long-standing name. Colour-binding/-switching cancel out.
Bishop+Camel=CALIPH, coined by myself for Ecumenical Chess. This piece is colourbound.
Girlscout+Knight=CROOKED MARSHAL.
Girlscout+Camel=CROOKED CANVASSER.
Boyscout+Knight=CROOKED CARDINAL, also a Fusion piece in my Herichess.
Boyscout+Camel=CROOKED CALIPH. This piece is colourbound.
Knight+Camel=GNU, a long-standing name used by game inventors and problematists alike.

In the Bent-piece variant:
Rook+Gryphon=REAPER, from Tripunch Chess.
Rook+Anchorite=ANCRESS, extrapolated from my other names for radially-enhanced Rooks.
Bishop+Gryphon=METROPOLITAN, a title in many churches but of particular prominence in the Eastern ones.
Bishop+Anchorite=HARVESTER, from Tripunch Chess. Colour-binding/-switching cancel out.
Gryphon+Anchorite=GORGON, named after a mythical creature with snakes for hair as its 16 paths criss-cross like unmanageable hair.

In the Double-Bent variant, and all of my own coinage:
Rook+Wolf=SHEWOLF, extrapolated from my other names for radially-enhanced Rooks.
Rook+Fox=VIXEN, likewise.
Bishop+Wolf=WOLFHOUND, a creature that runs (think Laufer/Loper/Futar) after Wolves.
Bishop+Fox=FOXHOUND, likewise after Foxes. This piece is colourbound.
Wolf+Fox=WEREWOLF, a fairly obvious indicator of an enhanced Wolf.

Pawns have no double-step move but may be promoted on reaching anywhere in the enemy camp - and must be on the far rank. Promotion is to any other capturable array piece, and therefore not to a compound piece.

Castling in both directions is identical to FIDE Queenside, except that if another piece has fused with the unmoved Rook it moves the entire compound.

Fusion involves one simple piece making its usual move to a square occupied by another of the same army. In subsequent moves the combined piece can move as either component. The opposite of Fusion is Fission, in which one component alone makes its usual move to an empty square and the other component stays where it is. Kings and unpromoted Pawns cannot be involved in Fusion. The Divergent variant has two subvariants depending on whether a Queen must always divide into the components that originally fused into it, or a Queen formed from a Rook and Bishop can become a Stewardess and Contrastewardess and vice versa.

Theoretically you could have a Fusion variant with 6 of the simple linepieces listed here or even (with two taking the place of the Knight and Camel) all 8, but 4 makes the overall page name nice and alliterative.