It should be the same as for rows/columns in 2d hexagonal games, right? (I'm not sure if we have a consistent policy for that...)

4d games are rare enough that I wouldn't have bothered to add a database column. It will probably cause confusion for new authors. But there's already reason to expound on the categories and index information on special cases, maybe as tooltips plus a link to a page describing non-obvious conventions?

The title of this page seems wrong on both counts: it is not infinite, and it is 4d, not 3d.

The introduction discusses infinite chess, but the eventual game description is clearly 4d (in an asymmetric, "2d+2d" way like Parton's Sphinx Chess).

Extending the number of ranks and files to infinity does not also increase the axes of movement through individual spaces. This is a large 2D game, but it is not 3D or 4D. So, I have removed it from those categories.

Playing about with this diagram I did seem to have run into some strange bugs:

I have updated the database and relevant scripts to better accommodate 4D games by including a new field for the 4th dimension called BoardRealms. However, I'm not sure what value to give it for this game or what value to change BoardLevels to now that it doesn't have to do all the work for both the 3rd and 4th dimensions.

The Diagram I posted only does active burning. Sorry I was unclear about that.

Adam implemented the burning by embedding a custom script for WeirdPromotion. Where he first tests whether a piece lands next to a burner (and in that case returns 251 as promotion code to make it a kamikaze move), and otherwise returns 512 when the moved piece is a burner.

I only used the captureMatrix parameter in my Diagram. There is no formalized way yet to specify passive burning by Diagram parameters; you would have to supply a JavaScript extension.

Strange. I had not tried it for WeirdPromotion, but I did now, and it works for me. The version on the CVP website has exactly the same size as the one I am using locally.

[Edit] Try refresshing the browser cache. Before I did that I had the same behaviour as you describe in the Diagram above.

Sounds awesome. Only problem is that returning 512 for the promomtion it doesn't work like it should. Instead of burning adjacent pieces it simply burns the moving piece as if you returned 251 for the promotion.

Respect the power of three Wazirs - they can checkmate a lone King in 47 moves.

True. But not very relevant. Three Ferzes do it faster when not all on the same color. (Addmitted, this rules out 1/4 of the cases.) But in Shatranj stalemate is a win, and even two Ferzes or Wazirs can force that on a bare King. And the worst case for the Ferzes is two moves faster than for the Wazirs, even when they are on the same color.

Since this comment is for a page that has not been published yet, you must be signed in to read it.

Unfortunatey a general t modifier is a bit hard to implement. Which is a pity, as with the unload modifier it would make it possible to describe magnetic pieces and catapult pieces.

So for now I added capture of pieces adjacent to the destination as a standard feature, controllable through the capture matrix and from WeirdPromotion(), as internally it uses the promotion element of the move array to trigger it. An @ in the captureMatrix orders promotion to piece number 512 for that particular combination of attacker and victim (wher the latter can also be an empty square). Now this is an invalid piece number, and used as a kludge to indicate 'burning'. How exactly this burning works depends on a new parameter atomicCapture=N. For N=0 it does Tenjiku-type burning: only enemies get burned, and the capturer survives. For larger N is gives you explosion like in Atomic Chess: all adjacent pieces are destroyed, friend and foe alike, but the first N piece types from the table survive, while the capturer always selfdestructs.

Now this works the same when you return 512 from WeirdPromotion(). But you have additional control there. By returning 512+C (0 < C < 256) you also trigger the burning. But in that case it burns only the squares selected through the bits of C, where 1 = N, 2 = NE, 4 = E, 8 = SE, etc. So WeirdPromotion() could do additional testing on the board to decide whether an adjacent piece should be burned or not. This could for instance be used to implement Ultima Pincher Pawns, by checking whether there is a friendly piece behind the adjacent one.

All this only works with newClick=1, which unfortunately means that the move diagrams (using the old highlight code) would not show the burning. It is not easy to cure that, as the move generator doesn't know about it (as far as that it is just a promotion), and no clicks on the burn victims are required . (During hovering over the move diagram the highlighting is as if the hovered square had received the second click, and it shows where the third can go.)

BTW, I now added a link to the Extended Betza article.

Now I see what you mean. I don't think it is something I have done!

To me they look normal!

Since people keep wanting to use tags for information that is already stored in the database, I have modified the footer script to include categories and board dimensions just above the tags section. 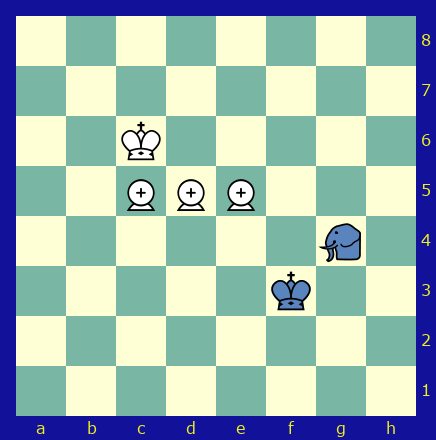 Respect the power of three Wazirs - they can checkmate a lone King in 47 moves. Also, I think the position in the diagram can be reached, leaving the Black Alfil limited to two squares: (e2) and (g4). Surely White can eventually force a trade of one Wazir for the Alfil. Question: would replacing the Alfil with an Alibaba (A+D) save the draw for Black?

What would be an appropriate tag for hexagonal boards?

Speaking of XBetza (or rather, IBetza), you should really consider adding a link to your page on Extended Betza Notation to this page. Even if it is not strictly identical to the one used in the interactive diagrams it would be a very helpful edition. I did check for a link to that page before writing this, and I couldn't find one.

The new definition for t could be quite interesting. It also helps that kc covers the old function of t (excluding capture of royals).

The diagrams on this and the Apothecary Chess-Classic page are missing white's brouhaha squares, and so are both corresponding game courier presets.